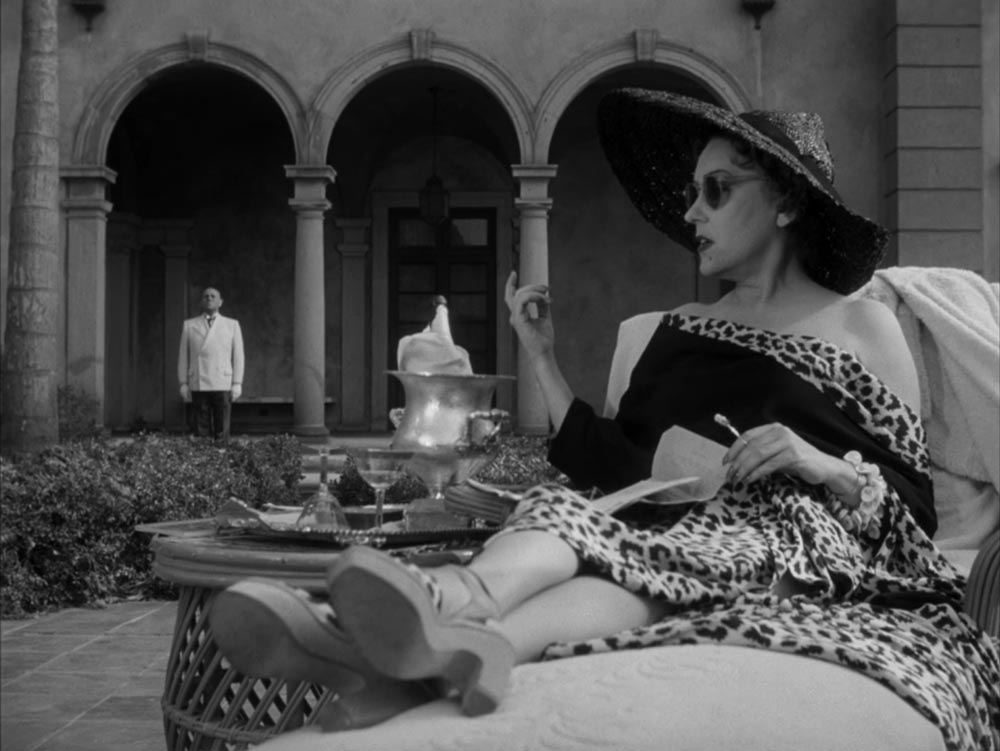 Windsor Square and Hancock Park’s central location in Los Angeles and collection of beautiful and historic homes has made it a popular shooting location for countless movies over the last decade. Many films have used the neighborhood to project an air of old Hollywood, while others have used the homes and schools in the neighborhood to stand in for an Anytown American suburb.

In the 1950 Paramount film, the grand estate of former silent-film star Norma Desmond (Gloria Swanson) appeared to be set back off of Sunset Boulevard. In reality, the house was located in Windsor Square, just north of Wilshire Boulevard at 641 South Irving Boulevard.

The house was commissioned in 1922 by businessman William O. Jenkins and was completed in 1925. Jenkins and his family spent most of their time in Mexico, so the house sat largely empty for a decade before Jenkins sold the home to J. Paul Getty in 1936. It was said that at the time of filming, Getty’s ex-wife was living at the estate and asked the studio to build her a new swimming pool as a condition of using the house.

The mansion was used again just five years later for the Warner Brothers film, Rebel Without A Cause. The house, appearing abandoned, was the location of a stand-off between James Dean’s crew and a gang of delinquents from their high school. This time, the house was depicted as being in the Hollywood Hills, near the Griffith Observatory.

Soon after the filming of Rebel Without A Cause, J. Paul Getty, enamored by the commercial prospects of the burgeoning Wilshire Boulevard, began the demolition of the home, despite an outcry (and a legal battle) from his neighbors.

By 1958, a six-story marble-adorned building was erected for the Getty-Tidewater Oil Company in its place. The building straddles the full block between Lorraine Blvd and S Irving Blvd and remains there today.

In What Ever Happened to Baby Jane?, another home in the neighborhood plays host to a delusional former starlet. In this Warner Brothers picture, an aging actress (Bette Davis) holds her paraplegic ex-movie star sister (Joan Crawford) captive in their grand house.

The house on S McCadden Place looks nearly identical today as to how it appeared in the film, as does the house across the street.

In the 80s film WarGames, a Windsor Square residence serves as the home of high school computer hacker David Lightman (a young Matthew Broderick), although movie is set in Snohomish, Washington. From his bedroom, Lightman accesses a US military supercomputer and accidentally sets the country on course for World War III.

The world must have survived in this 80s techno-thriller because the house still stands and looks much the same as in the film.

Pretty in Pink is another 80s film that uses a residence in the neighborhood (although the film is set in Chicago). The house on S June Street serves the home of Steff, cool-kid and Molly Ringwald foil, played by James Spader. In an early scene, Ringwald’s character looks on, imagining living in the picturesque home. A later party scene was also filmed on location in the house.

The interior scenes of Ringwald’s school were filmed at John Burroughs Middle School (600 S McCadden Place). The school has been used for many other movies, including A Nightmare on Elm Street, Pleasantville, and Never Been Kissed.

This Drew Barrymore rom-com used both the interior and exterior of John Burroughs. In the film, investigative reporter Josie Geller goes undercover to infiltrate a high school with the mission of writing an article about 90s teens. The neighborhood once again stands in for Chicago here.

The school’s prom scene was filmed nearby, with 4526 Wilshire Boulevard being used for the exterior prom shots and The Ebell (Wilshire Blvd and S Lucerne Blvd) used for the interior party scenes.

This contemporary black-and-white silent film uses Windsor Square and Hancock Park extensively to transport viewers back to the Hollywood of the late 20s and early 30s. In the film, silent film star George Valentin is shown to live in a mansion at 104 Fremont Place and actress Peppy Miller is shown to live in an estate at 56 Fremont Place (which was the actual one-time home of pioneering film actress and producer Mary Pickford).

The Ebell appears as the location of an auction hall in the film.

In one scene, George’s dog catches the attention of a police officer on the corner of Oakwood Avenue and N June Street.

Larchmont Boulevard’s old-town shopping district has been used in many films dating back to the turn of the 20th century.

The 1967 Bob Hope film Eight on the Lam, directed by George Marshall, used the street for several scenes. In the movie, bank teller Henry Dimsdale (Bob Hope) finds $10,000 on the ground, and after a great deal of deliberation, decides to keep the money to help support himself and his seven children. However, when the bank accounts for a $50,000 shortage in their books, Henry becomes the prime suspect.

As police try to catch Henry, he hides in a protest march on the corner of Larchmont and 1st.