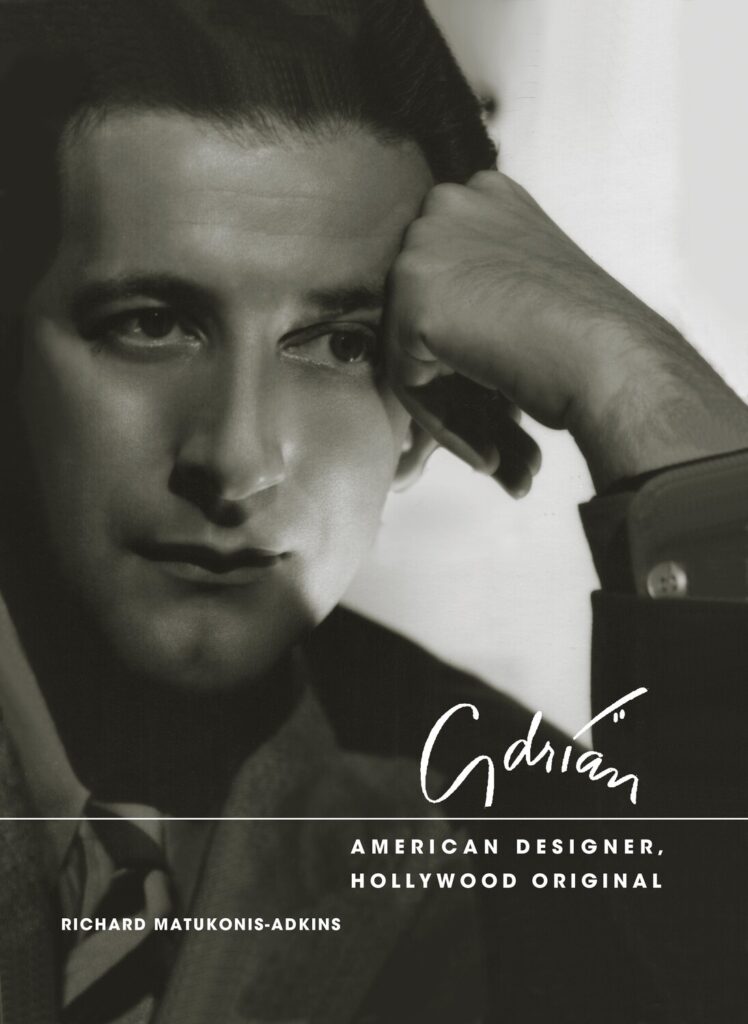 Wednesday, September 22nd. 7:00 PM. In 1933, “Fortune” magazine suggested to the American fashion industry that they could benefit from the showmanship demonstrated by the Hollywood designers in order to compete with the French couturiers. The Hollywood designer “Fortune” most praised was Adrian of M-G-M. It was a logical choice as Adrian’s design for Joan Crawford in the 1932 film “Letty Lynton” dominated the fashion industry for the next two years. Join us for Adrian, American Designer, Hollywood Original by Richard Matukonis-Adkins.

Despite offers to go into the retail business as early as 1928, Adrian did not enter the commercial fashion world until 1942, after leaving M-G-M, but taking his fame with him. In 1944 he would win the prestigious Coty Award for fashion design. One of the reasons he did so was his innovative Trompe l’oiel painted imagery on fabric, a tasteful solution to the L-85 fabric restrictions of World War II. So proud of the award was Adrian that he added the line “American Designer” to all his advertisements in the prestigious fashion magazines.

By 1952, he had achieved all his dreams. He was famous, successful, married to a lovely woman, movie star Janet Gaynor, father to a son, Robin, had traveled to Africa, and was working happily in fashion, theatre, and fine art. Unfortunately, a weak heart demanded he give up his fashion business. His “retirement” however, was hardly inactive.

Attendance at a film festival in Brazil in 1952 led the Adrians to build – by hand – a home outside the new capital of Brasilia. They spent half their year in Brazil and half in Los Angeles. Janet made a return to movies in 1957, and Adrian designed his first stage production since 1924, a musical version of his film hit “Grand Hotel”. Dual offers came to Janet and Adrian to continue theatrical work, her to star in “Midnight Sun” with Arthur Hill, and for Adrian to design for the musical which became “Camelot” and for which he was awarded a posthumous Tony Award, shared with Tony Duquette, who completed the production after Adrian suddenly died three months into the assignment.

The nostalgia boom began just a few years after Adrian’s passing, but the surviving pieces of his film work were soon commanding high prices at auctions, with the Judy Garland-worn ruby slippers becoming the most valuable of all movie artifacts. Also, his couturier work began to be presented in museum exhibitions all over the world.
According to their son, Robin, neither Janet nor Adrian dwelt in the past. He would probably be a little surprised at the attention his work still receives, but would nonetheless be pleased about it, I’m sure.

I have studied Adrian and his work for the last two decades, with the result being my book, “Adrian – American Designer, Hollywood Original” and I am pleased to be able to share new information with those familiar with his work and to introduce him to new audiences who know the designer, but not as much about the man.