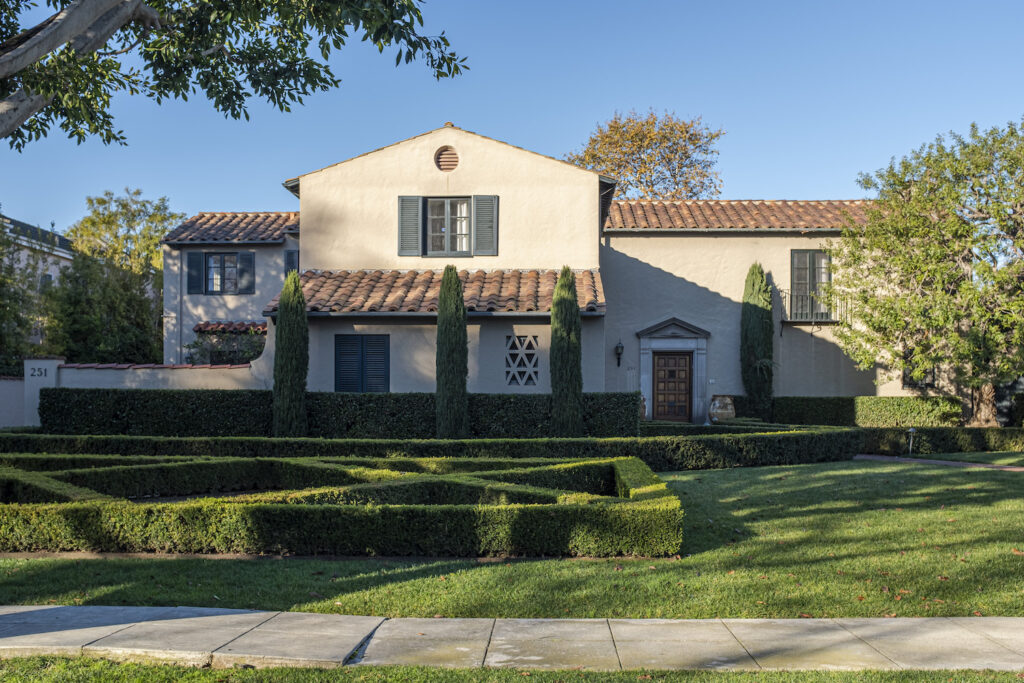 If the O’Melvenys saved Los Angeles from anonymity, the Leimerts brought its neighborhoods into the modern era.  “Family Engaged in Business for More Than (a) Century” reads a 1986 Los Angeles Times headline.  Walter H. Leimert, founder of the namesake real estate development firm, was the original owner of this gracious home on Muirfield Road.  The family business began in 1902 in Oakland, California, where they developed Piedmont and the Lakeshore Highlands in the hills above Oakland.  When they moved to Los Angeles in the mid-1920s, the entire family lived at the Biltmore Hotel downtown, the first family to do so.  Within a few years their new home on Muirfield was completed.

The Walter H. Leimert company is “headquartered in the building the firm developed at 606 No. Larchmont Boulevard.  Although the family’s real estate firm name is instantly associated with Leimert Park, the company has been on Larchmont since the office moved from Leimert Park to the building it erected at 444 Larchmont in 1963…in 1972 the company built the four-story 606 No. Larchmont building, and a few years later erected a one-story building at the northwest corner of Larchmont and Rosewood Avenue.”

Although the firm began its Southern California development in Glendale, it was Walter Leimert’s goal to create a mixed-use development of single-family homes, multi-family complexes, and commercial buildings.  This development would include a park and a homeowners’ association.  This had not previously been done on the Pacific Coast.  To achieve the best possible results, Walter went to the finest land­scaping firm in the country, Olmstead & Olmstead (designers of Central Park, Golden Gate Park, Biltmore Estate) which had a national reputation for creating the most desirable residential landscapes. Thus, Leimert Park was born, termed “The City of Tomorrow” by Life Magazine.  Several of the homes were designed by leading architects including Roland Coate (211 Muirfield), Sumner Spaulding, and Richard Neutra.

“With the Depression that followed the 1929 stock market crash, you couldn’t give real estate away, my father used to say,” says Tim Leimert in a 1986 inter­view with the Los Angeles Times.

“My father was badly hurt in the Depression, and it scared me as a boy to see how agitated he was, trying to keep from going bankrupt,” he continued.  Apparently, Tim wasn’t exaggerating and on August 16, 1936, their beautiful home on Muirfield was sold to Mr. Authur B. Cecil.  However, Walter never did go the way so many others did during those hard times and the firm remained solvent.  Leimert Park, like its predecessor, Hancock Park, became a grand success and a sought after address in the post­ WWII years.

The family-owned company later developed Beverlywood, parts of Baldwin Hills and Beverly Highlands, St. Hubert Wood in Orange County and several other developments throughout the state.  The firm is a recipient of the Centennial Business Award of the California Historical Society in recognition of its lasting achievements.