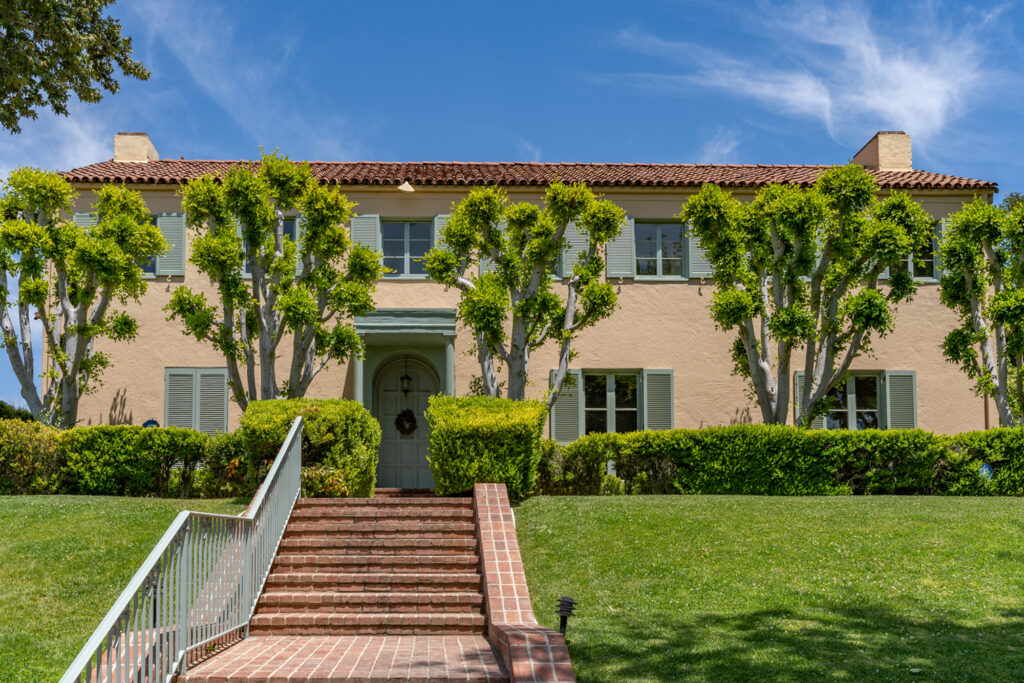 Robert Farquhar (18972-1967) is one of Los Angeles’ most renowned architects.  His long career spanned designing of Festival Hall at San Francisco’s 1915 World Exhibition to being the chief architect of the Pentagon in Washington, D.C.  This home was built just three years before achieving his pinnacle – the William Andrews Clark Library at West Adams Blvd. and Cimmaron.  William Andrews Clark, heir to the “Copper King” of Montana, told Robert Farquhar to build him a jewel box for the protection of his treasures; to spare no expense.”

The library is referred to as “the Sainte Chapelle of books.  The library building itself may indeed be the most exquisite building on the Pacific Coast.”

Truly, this home on Muirfield reflects the art of this talented architect, to create the essence of the meaning of “home”.  Mr. and Mrs. Fudger, who owned several large lots on the north end of Muirfield, built this residence in 1923.  Apparently, they later decided they would rather live on the Country Club side of the street at 211 Muirfield.  With the completion of the more “trendy” Spanish Revival home in 1926, they moved, selling this house to Mr. and Mrs. John O’Melveny.  You may be familiar with the old Los Angeles law firm, O’Melveny and Myers, of which John’s father was the senior partner.  The firm is now one of the largest and most prestigious firms in the nation, employing 324 attorneys in five offices nationwide.  John’s grandfather was Harvey K. O’Melveny, one of the first judges in Los Angeles County and founder of the family law firm in 1885.  We may owe more to John O’Melveny’s grandfather for making Los Angeles a world class city than to any other individual.  In 1872, Huntington and Stanford were threatening to have their Southern Pacific Railroad by pass Los Angeles for San Diego, (via the Cajon Pass).  H.K. O’Melveny led the cause to pay them to come to Los Angeles.

“A handful of city makers – B.D. Wilson, H.K. O’Melveny, R.M. Widney – had led the fight for the subsidy and forced Los Angeles to seize its destiny.  In one stroke they has won a transcontinental connection for Los Angeles, triumphed over San Bernardino and the Cajon route, and foiled the attempt of San Diegans to make their own city the railroad center of the southern coast.”

Interestingly, the lot on which this home now stands originally continued north 100 feet to the curve in Muirfield.  In the 1940s the lot was divided into two.  The north 100 feet was sold to William and Elizabeth Rosecrans who built the stately home that is there today, William Rosecrans’s grandfather was Civil Was General William Starke Rosecrans, after whom Rosecrans Avenue is named.  Gen. Rosecrans “was without a doubt, one of the greatest generals the war produced, and as a strategist he stood among the foremost.”