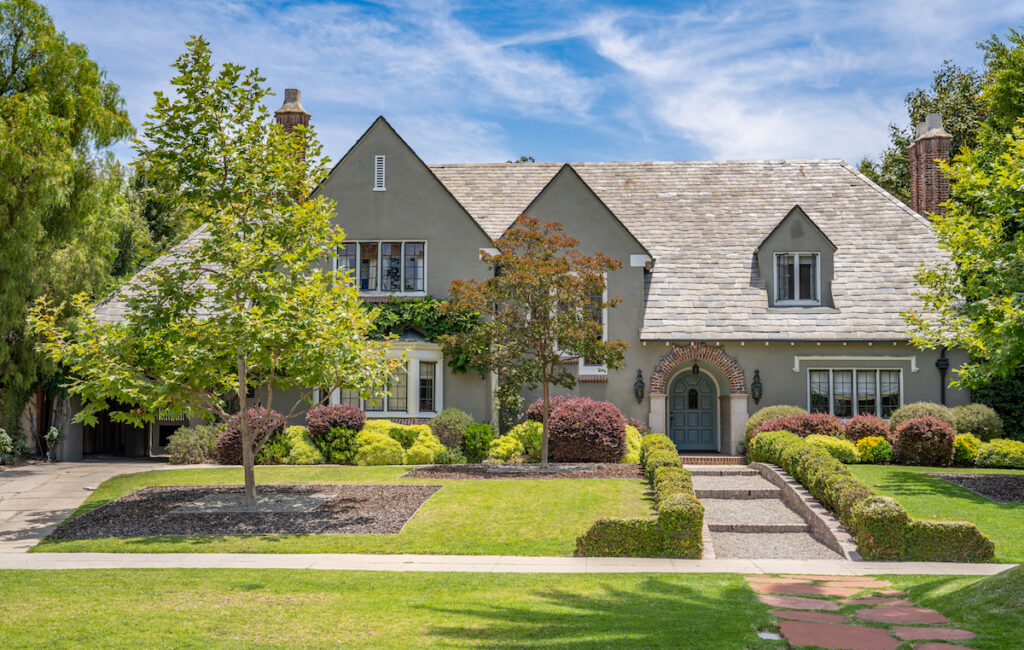 This home was built in 1926, during the time of prosperity following World War I, at an estimated cost of $20K plus $2.5K for the garage and servants’ rooms. Although Old Windsor Square began its development around 1911, it was in the 1920s that Los Angeles experienced growth in enormous proportions.

The lot was purchased in 1923 by Martha Banks, wife of Thomas W. Banks, vice president of Banks, Huntley Co., investment bankers, perhaps as an investment. Windsor Square was originally developed with building restrictions which assured investors that a discerning builder would pay any price to live in this fashionable affluent up-scale neighborhood.

The home was designed and constructed by an outstanding architect, Arthur Rolland Kelly (1878-1957), born and educated in Iowa. He attended Cornell University and State Agricultural and Engineering College of Iowa where he studied architecture. He moved to California in 1902, and began a practice in 1907 that led to the formation of Kelly & (Joe) Estep Associates in the mid 1920s. Until this partnership, his talent grew with commissions for hotels, schools, commercial buildings and residences for wealthy clients. Included among the homes he designed for prominent citizens are H.H. Culver (Culver City), Harold Janns (Janns Corporation), and A.J Sayre (businessman). Until he partnered with Estep, he designed the Biltmore Hotel (Fifth & Los Angeles Streets,) Hollywood Women’s Club, and Hotel Christie, Hollywood. After teaming up with Estep, their work appeared in issues of “Architectural Digest” with illustrated plans for the residences of Irwin J. Meema, and Arthur Letts, Jr., founder of the Broadway Department Store. The Letts’ home, located in Holmby Hills, is now known as the Playboy Mansion. The list of Kelly’s accomplishments goes on and on.

The Plymouth home is made up of a number of architectural motifs favored for Tudor Revivals, an irregular composition of steeply pitched roofs, bands of casement windows, half timbering and highly ornamental stack chimneys. The tri-partite steeped windows on the staircase are not a Tudor detail; however, leaded glass windows are a key element in many Tudor Revival houses. The stained-glass medallion in each window showing a galleon under full sail, a shield surrounded by a crown, and a shield entwined with swags were popular motifs in the 1920s. The shields are understandable because they refer to the heraldic tradition in medieval England. The galleon has no historical precedent, and is in fact often found on Spanish Revivals here is it’s a popular motif for weather vanes.

This home was built for Myron C. Albertson. Nothing is known about Albertson or the next owner,  M.J. Gerry. From 1969 to 1978 Renee and Pierre Taix of the Taix Family owned the home. They also owned and operated a French food restaurant on Sunset Boulevard that has become a downtown tradition and is still in business today. Research found nothing on subsequent owners.

The current owner has taken great care in maintaining the original beauty of this home. The Windsor Square Hancock Park Historical Society acknowledged this home in 2000 with Historic Landmark Award #68.