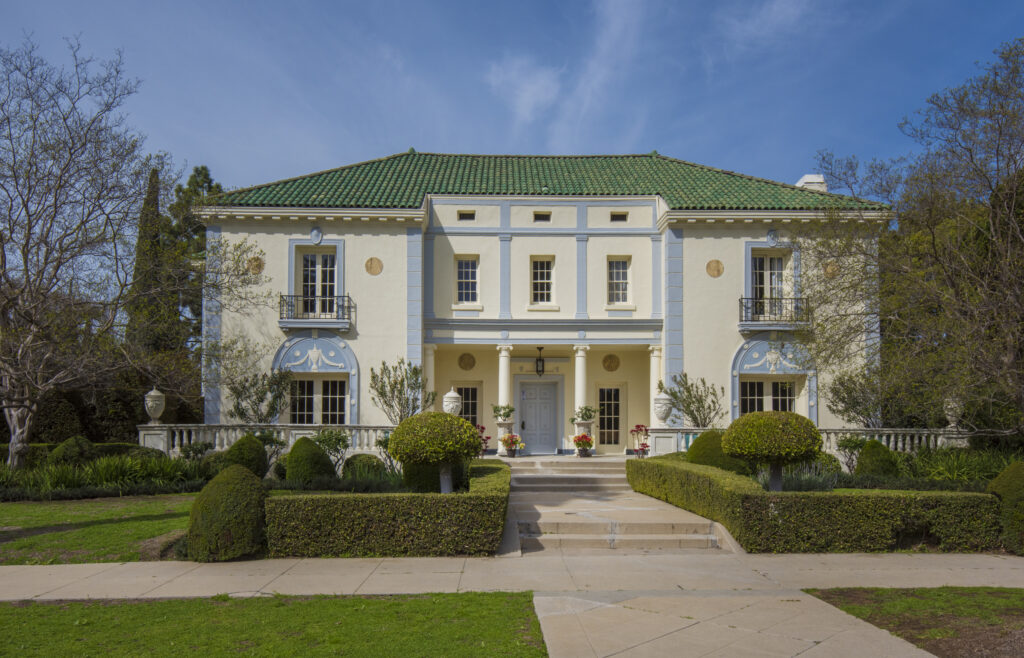 The Windsor Square Hancock Park Historical Society was founded in 1976, the bicentennial of our nation’s birth. Since then almost a thousand stately homes in both Hancock Park, Windsor Square and the surrounding environs have been painstakingly researched by volunteer members. The Historical Observer is a venue to digitally document these archives on our website for our current members as well as future members to research and enjoy.

THE HOME AND OWNERS

This stately home is an excellent example of Italian Renaissance design. The design source for this house can be found in the work of Italian architect Andre Palldio (1508-1580) who is best known for the grand country houses and public building in Vincenza and the surrounding countryside. His treatise, “The Four Books of Architecture”, was the most influential publication on architecture during sixteenth, seventeenth and eighteenth centuries. His buildings continue to be a source of inspiration to architects interested in neo-classical design.

The salient features of the house at 425 S. Plymouth that are Palladian include the recessed center section of the facade that is flanked by slightly projecting wings. The facade of the house is divided into four layers, the basement (the terrace level), the ground floor, the piano noble (second floor) and the attic. The roof is pulled back over the central section of the house to allow the introduction of the three small rectangular attic windows that were the prime element of the attic level. This unique feature is also a prominent element of the Villa Godi.

The circular windows in the recessed porch and the rondels plaques on the second floor was a popular motif found in many of Palladio’s compositions such as the Palazzio della Ragione in Vincena.

The dramatic neo-classical urn and swags that are executed bas- relief over the first floor windows are related to sumptuous wall designs used by Palladio as a relief to the normally severed appearance of his buildings. At the Villa Babaro over scaled bas- relief swags of fruits, monumental figures and various classical elements provide an over abundant surface decoration to a semi-circular wall that forms the background to a great nymphaeum pool.

The property was purchased in 1912 by William Jerome & Hattie J. Toomey and built for them in 1917-1918 at an estimated cost of $27,000 for the home, a large sum at the time, and $1,000 for the garage.The original building indicates that Frank L. Meline was the architect. Although his life work does not reflect what we would look for in a career as an architect, he certainly had something to do in connection with the building of his home. There is no doubt that the designer of his house had to have knowledge of the work of Andrea Palladio. Frank L. Meline was born in Jacksonville, Illinois and spent his youth there. He came to Los Angeles in 1902, where he entered business and subsequently organized and directed many important realty projects as Frank L. Meline Co., Inc. Realtors. In the mid-1920’s he became president of Hollywood Laundry Service, Inc., the California Laundry, Inc. and the Beverly Hills Laundry, Inc. He was director of L.A. Mountain Park Co., and Mortgage Discount Co., LA.  He belonged to the L.A. Athletic Club, the L.A. Yacht Club, Hollywood Athletic Club, Bel Air Country Club, Edgewater Beach Club, and Whitley Country Clubs.

This Home has had three owners over the years. Unfortunately, nothing was found about the Toomeys who owned t until 1924 when it passed to Alfred T. Kingsbaker who owned it until 1970.  In 1955, while residing in the home, Mr. Kingsbaker was the secretary of Wilshire Boulevard Temple: Congregation B’Nai B’Rith. The current has lived in the home since 1970.

In 2000, this home was awarded Historical Landmark Award #69 by the Windsor Square Hancock Park Historical Society.