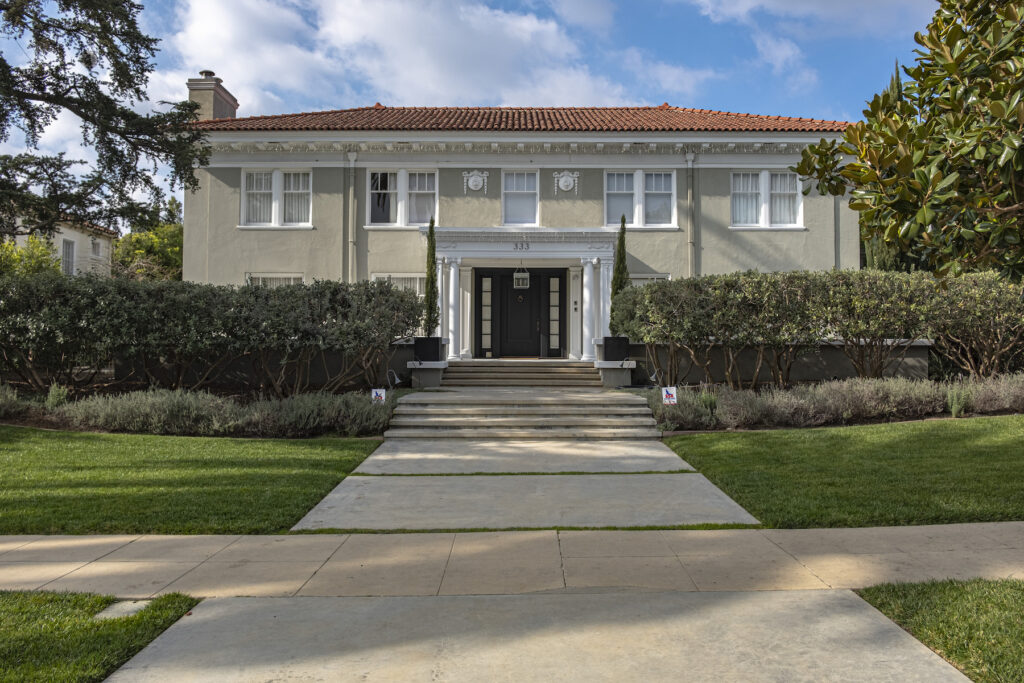 This classic Mediterranean style home was built in 1914 by Mary Commons.  She hired the architectural team of Morgan, Walls & Morgan which consisted of Octavius Morgan, his son, O.M. Morgan, and J.A. Walls.  Many landmark buildings are attributed to this design team.  Octavius Morgan designed the W.P. Story Building at Sixth and Broadway, the Sisters of Charity Hospital, Hollenbeck Home for Aged People, the I.N. Van Nuys Building and the Holingworth Building.  Buildings attributed to J.A. Walls include the Church of Christ in Vernon, Savoy Hotel in Los Angeles, and the Los Angeles Stock Exchange.

This home is two stories with full tile roof.  A long walkway leads to the terraced steps graced with terra cotta urns and a hospitable front entrance featuring spacious side windows.  An upper balcony supported by classic Ionic columns and pilasters acts as a portico for the elegant front door.  Traditional friezes symmetrically flank a second story window.  Two large Deodar cedar trees, probably original to the land or house, are on the south side of the front yard.

Dimitri Tiomkin, composer of film scores and winner of four Academy Awards, purchased the property in 1948 and owned it until 1969.  In 1955 he added a music room, possibly where several future film scores were composed.  Mr. Tiomkin’s 160 film scores, characteristically written in a soaring, Tchaikovskian style which reflected his Russian schooling, included The Alamo, The Old Man and the Sea, and The High and the Mighty, all Oscar Winners.  His fourth Oscar was for High Noon.  His basic good humor was communicated in a 1950s autobiography, Please Don’t Hate Me, co-authored with Prosper Buranelli, writer and promoter of the cross-word puzzle.