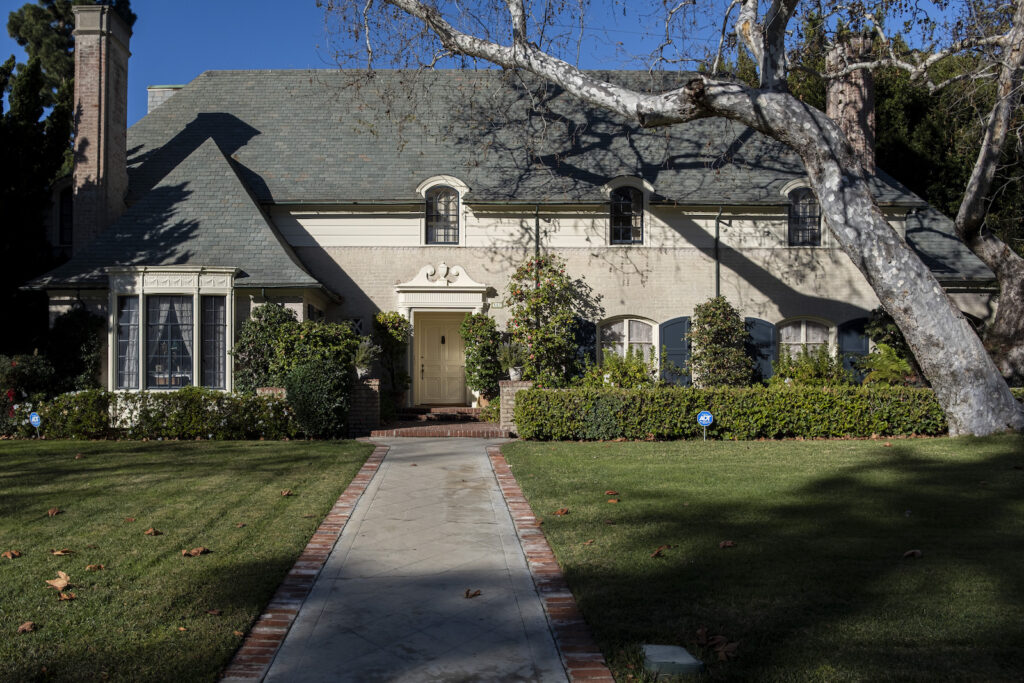 The Lee Chases are only the second owners of the Paul Williams’ designed, two-story French Normandy home built in 1932 for the William Collins family.  The house has five bedrooms, five baths, a three-room basement and a full attic.  Mr. and Mrs. Chase purchased the home in 1967 after it sat vacant for seven years.

The banister in the entry hall is original, believed to have been carved on the job.  Other original furnishings include the telephone table on the ground floor near the entry way and the chandelier in the stairwell.  The library/den has the original wood paneling which was installed at a time when there were so many skilled craftsmen looking for work that an employer often received two days’ work for one day’s wages.  A hidden bar feature, common to large houses built during prohibition, is accessed by a secret panel controlled by an electric key lock.  The miniature upstairs kitchen staging area contains a sink, bread board, hot plate and ironing board.

Throughout the home both the interior and exterior has a feeling of understated elegance punctuated by the subtle and meticulous use of molding and detailed design features.  Only a few remodeling jobs have been undertaken by the current owners.  When the Chases wanted to enlarge the eating area off the kitchen by removing a wall, Paul Williams advised them as to the best way to achieve the effect they were seeking.  A circular driveway on the Sixth Street side of the house was removed to enlarge the back yard and a brick wall was moved approximately twelve feet toward Sixth Street.  Many of the left over bricks from the wall were used to enlarge the patio.  There is a notch in the back yard tree indicating where the brick wall was originally located.

Mr. Chase’s family came to Los Angeles from Seattle and Chicago shortly after World War I.  Mrs. Chase’s grandmother arrived in Los Angeles from Iowa in 1870 and stayed at the Pio Pico house in downtown L.A.  The Chases have three teenagers whose lifestyles are very active and social.  To accommodate their enthusiasm and provide entertainment, most of the furnishings were removed from the living room, put into storage and the room converted into a game and recreation area.  The tin slot machine is an antique; however, the majority of the other games are circa 1950.  Much of the Chase family memorabilia, most of which belonged to Mrs. Chase’s grandmother, is prominently displayed including the spinet piano which was successfully converted to a desk.  The Chase home demonstrates what unconventional thinking and creativity can do to make a Paul Williams’ design adaptable for active teenagers.